When I was eleven years old, I had “completed” reciting the Quran, so my parents sent me to recite some extra whilst my younger brother was learning. It was from a teacher who we all called ‘dhadha’, grandad in Bangla. It was a small group of five kids.

This dhadha wasn’t the usual Quran teachers you had in the 90s, this dhadha taught us how to recite Quran but also told us that, what we recite means something. I remember thinking, finally someone is telling me these foreign words have meaning. He told me the meaning of different surahs. Once my brother was reciting surah Baqarah to him, and had recited the name of Adam (as) – the teacher stopped him and told us the story of Adam (as) and iblis. I loved it. We kept asking him to tell us more stories, and he did. It was to be a treat for us and we actually looked forward to attending the classes.

When this dhadha had told me the story of the elephant and how that was year of the Prophet’s (saw) birth, I was like wow. Elephants and birds in a fight. And the funny thing is, no matter how many times I read the Tafsir of surah al Fil now, when in salah, I actually only remember what this teacher had taught me. Because he had actually taught me the basic outline of the story and also small lessons – that protection comes only from Allah, no matter who you are; King or pauper.

By the time I was 12, my brother started attending madrassah, so we stopped going to the small classes. But this teacher had done more than his job; he not only sparked in me an interest for the Quran, he is probably, someone I still think about whenever I read the translation or Tafsir of the Quran. He was able to create a love for Allah’s words in a young child, something my parents or anyone else hadn’t. I haven’t seen this teacher for a very long time, I often ask my parents about him, and I always make dua for him. He didn’t have to tell us that the Quran holds stories, but he did, he made the Quran real for me, and over 20 years later I still appreciate it from the bottom of my heart.

I feel if the Quran hadn’t been opened up for me with stories and lessons, I would probably never had paid much attention. If he hadn’t told me that when you recite the word Jannah, stop and ask for it and when you recite the word jahannam, stop and fear it – I would continue to recite it mindlessly. To be honest, his teaching didn’t come into effect until much later in life, but he built the foundations, which were made stronger as I got older. 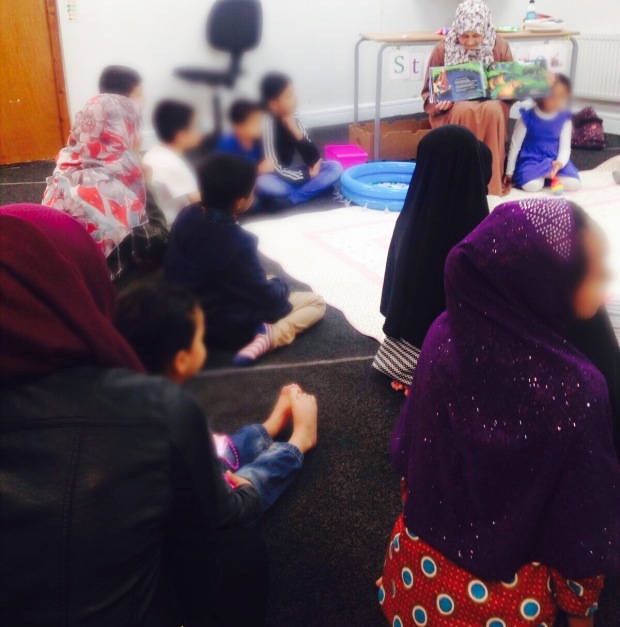 Why did I just write a semi biography about myself, because today I did a small story telling session at the masjid. Something I’ve been wanting to do for such a long, long time. Why? Because of this dhadha teacher of mine, because I want to attempt to achieve even a tiny bit of what he had done for me. I read the Prophet’s Pond (available from Learning Roots), we spoke about Jannah, the breathtaking Hawd, and how we all want to get there. We even tried to make a small pond as a craft project and spoke about the Hadith about the Hawd. I don’t know how much the kids took away, but I’m making dua that one day, when these little Muslims grow up, they will have in them an eagerness to approach stories, that mean something to us as believers. I make dua, that we as adults can realise that we play a much bigger role in a child’s life and thinking than we know.

If you’ve read this post, please make dua for me, make dua Allah allows me to experience iman in its beautiful form. I make dua that as an ummah, we all meet by the Prophet’s pond. Ameen.

One thought on “My Qasas of stories”